They are the great decomposers of the earth, making fertile soil from what was once solid matter, helping forests flourish, which in turn provide ample oxygen for our planet! Without them, we would surely suffer as a species.

Well it turns out, mushrooms have many unique talents – including the ability to clean up oil spills and pollution. (Check out mushroom guru Paul Stamets for more on how mushrooms can save the world!)

Commonly known as ‘Ling Zhi’ in Chinese, which translates to ‘herb of spiritual potency,’ Reishi is also referred to as the ‘mushroom of immortality’ or the Taoist ‘elixir of life,’ and has been traditionally revered as a longevity and vitality-enhancing tonic.

According to Dr. Jimi Wollumbin (TCM),

“In traditional Chinese medicine, Reishi is considered to be a 3 treasure tonic. Taoist health philosophy is founded on the idea that all life is comprised of 3 “treasures,” or energies: Jing or ‘essence,’ Qi or ‘subtle matter,’ and Shen or ‘spirit/ consciousness.’ Modern Chinese Medicine Texts often list Reishi as a powerful ‘Shen tonic,’ which translates loosely to an herb that nourishes the spirit.”

Although it has been prized for over 2000 years in Asia (some say 4000 years), Reishi has been relatively unknown if the West until the last 30 years or so. In recent times however, Reishi has become popular worldwide (and studied extensively) for its many benefits including:

●      Anti-viral (active against HIV, Herpes Simplex, HBV, and Influenza A)

Also known as ‘caterpillar fungus,’ Cordyceps is a parasitic fungi that takes over the body of a caterpillar, eventually killing, mummifying and growing out of the head of its host as it fruits. Fascinating, but freaky fungal fanatics aside, Cordyceps is a powerful energy tonic that helps build physical power, helps the body utilise and absorb oxygen, benefits endurance and reduces fatigue. The Taoists revere this rare fungus as a life-enhancing herb, immune stimulant and overall tonic.

Some of the reported benefits of Cordyceps include:

●      Increased stamina and efficiency of the circulatory system

●      Strengthening of kidneys and adrenals

Lion’s Mane mushroom actually looks a bit like a white pom-pom, and its botanical name translates to ‘hedgehog.’ It has been used traditional in China for hundreds of years, prescribed for many ailments including stomach problems and cancer prevention. It is known to increase the strength of the immune system, helping the body ward of sickness and stay healthy.  Recent studies have found it to have antioxidant effects, reduce blood lipid and blood glucose levels, to increase cognition and memory, reduce anxiety, and stimulate Nerve Growth Factor (lack of NGF can contribute to dementia and Alzheimer’s).
Benefits of Lion’s Mane may include:

Chaga does not look like a mushroom at all, it is in fact an extremely hard black fungi that grows on birch trees in Northern temperate climates and is the most nutritionally dense of all the tree growths. Known by the Siberians as the “Gift from God,” the Japanese refer to it as the “Diamond of the Forest”, and to the Chinese it is the “King of Mushrooms.” It has been used to support health and vitality for thousands of years, but has been relatively unknown in the West until recently.  The Russians, in their extensive research into adaptogens, found it to be the most adaptogenic substance on earth!

Some of the benefits of Chaga include:

A popular edible and medicinal mushroom in Asia, Shiitake has been used for it’s many health benefits in China and Japan for thousands of years. It has long been revered for strengthening the immune system, partially due to high amounts of interferons (proteins which inhibit the replication of pathogens) as well as many polysaccharides. As a food source, shiitake is high in protein and bio-available iron and contains all eight essential amino acids in an optimum ratio. It also lowers cholesterol levels, and recent studies show it’s ability to protect against cardiovascular diseases. Shiitake is also used in cancer prevention, and studies have found it to help block tumour growth.  Other benefits include antioxidant, antifungal, antiviral and antibacterial effects.

Another edible and medicinal mushroom, Maitake mushrooms have been used in Japan and Asia for hundreds (if not thousands) of years, and traditionally prized to promote longevity.  Sometimes called ‘Hen of the Woods’ in English they are also native to Europe and North America. Maitake have immune boosting benefits, are used in cancer therapy, lower blood sugar levels, lower blood pressure and blood lipids, prevent cardiovascular disease, and lower cholesterol levels.

As you can see, there are so many amazing medicinal mushrooms out there, ready to help us boost our immunity, longevity, energy and more. So, if you’re looking for superior health, you need look no further than the forest. Enjoy, 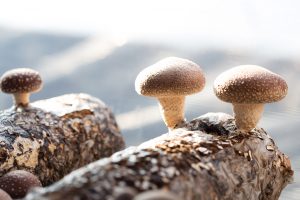