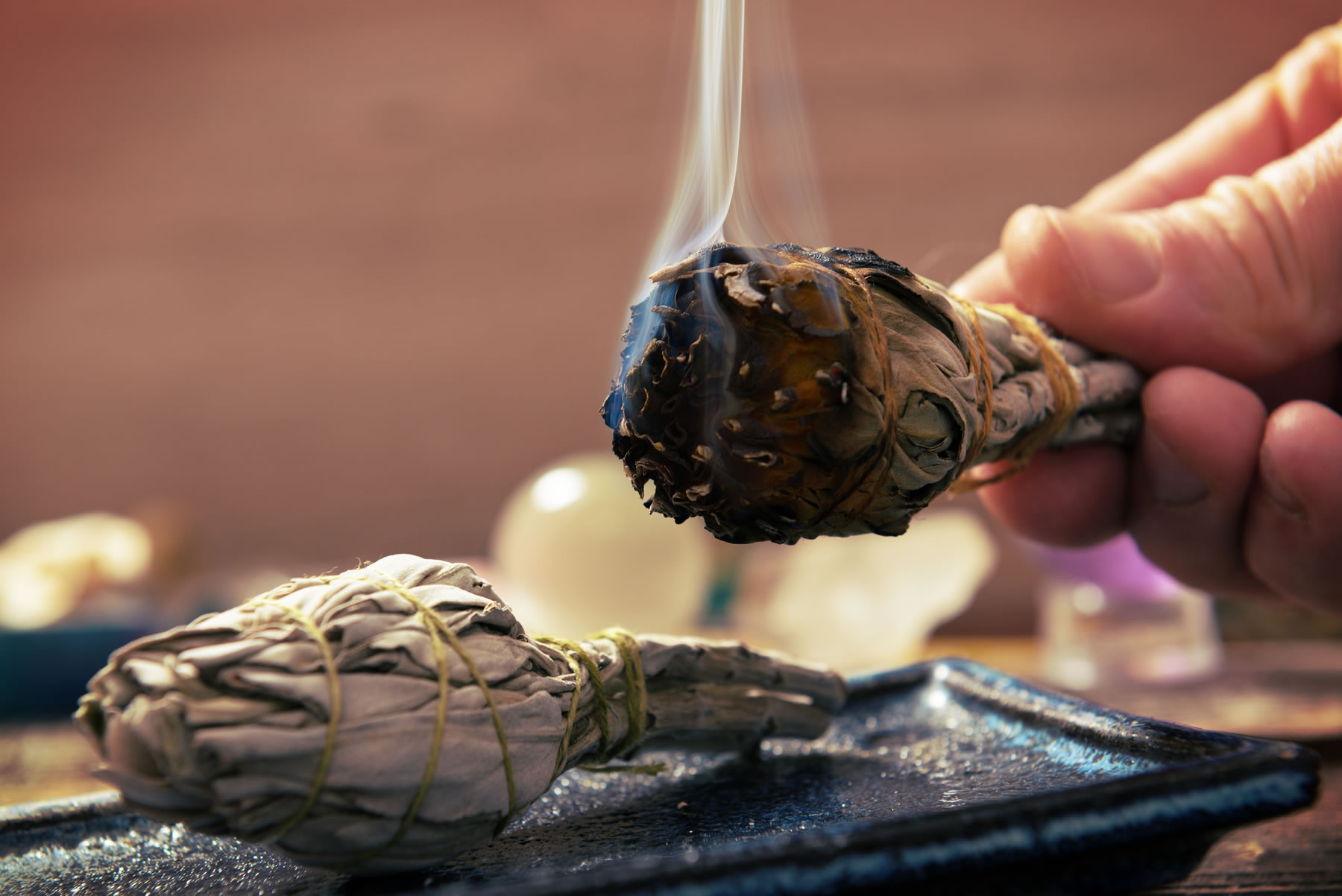 The Magic and Medicine of Sacred Smoke

The essence of smoke is mystical and ecovative, and is a fundamental human symbol of higher realms.  Smoke used for sacred ceremony can be seen in all cultures across all time, with the basic element of fire relating to transformation.  Smoke can symbolise our contact with the spiritual world, and is often used as a conduit to communicate and invoke spirits.

We can find the symbolic use of smoke in many cultures.

The use of smoke has been used amongst many primitive cultures as a way of releasing a dead body’s soul on its journey.  In a Viking funeral they would send their departed on a ship or raft out to the fjord, to initiate their journey into the afterlife.   They would then fire flaming arrows at the ship until it caught a blaze and then witness the smoke carry their spirit up to Valhalla.

The burning of some kind of substance, whether it be incense, herbs, sacred wood, or holy resins, can be found in all places of worship.  Smoke will always have a place in spiritual ceremony no matter which culture, religion, spiritual practice, or indigenous group.

Aboriginal births would include the mother crouching over a fire and then holding her baby in the smoke to seal its spirit in its mortal body.  At each milestone in the child’s life, it would be purified and sealed by the smoke again.

The Native Americans use smoke to smudge, which is done to drive away sickness and bad energy, and help the people taking part in the ceremony to ground and center.  Traditionally this was a pot filled with tobacco, sweetgrass, sage, and cedar.   The smudge pot was fanned around the room so that the people could bathe in its healing, cleansing and spiritual qualities.

In the Caribbean, cigar and tobacco smoke is puffed over the men by the Shaman to cleanse and strengthen them.  Any smoke entering the body would take in with it the power of the spirit carried in the smoke.

The Bible is full of references of using incense as a symbol of prayers rising up to god in heaven.  It appears that the rising of the smoke appears to be worshipped for its ability to rise up to the heavens. Hari Krishnas believe cow dung to be a purification agent, and so they will burn it along with sugar mixed with any of the following; Sandalwood, camphor, musk, agrur or frankincense.

Aboriginal sacred smoking ceremonies are very much a part of our Australian culture, and  has many purposes. It is often used as a welcome ceremony and shows a sign of respect for people past and present.

As many of us feel a desire to shift from our modern western culture, and reclaim the memory and essence of our deeper selves, we are becoming more and more attracted to ancient practices.Sacred Smoke has the power to transform and deflect unwanted energy, bless a space as sacred, and connect you to your higher self.  It can raise the vibration of a room or an environment and is mostly used to invoke the spiritual realms for cleansing. Whether it be fire, herbs, resins, incense or sacred woods, each smoke has its own healing powers and specific uses, and carries with it the unique signature of the cultures that honour and it.

Herbs, resins and woods are often used in the form of a smudge, and burned in a sacred bowl, often an abalone shell.   When using herbs, the leaves are either bound together to make a smudge stick, or burned loosely.  Smudging is often a crucial first step to any ceremony or ritual, to purify, cleanse and to invoke the spirits you wish to work with.  It always brings a sense of sacredness and presence!

How to smudge – Light one end of your smudge stick, wood, or resin particles, and allow it to catch fire and begin to smoke.  If the flame doesn’t naturally extinguish, waft it with your hand or moving the bowl.  It is important not to blow on the smudge as this puts your energy onto it.  Traditionally a feather or birds wing is used to fan the smoke and direct it on the person or space you wish to cleanse.

If you don’t have anything to fan the smoke and need to get air onto it, move it vigorously in a figure of 8 (sign of infinity).  Now that you are familiar with the actual smoking process, it is up to you how you use it for ceremony or ritual. If you wish to use it to cleanse yourself, ensure that you cover all of the body, head to the base of your feet.

The most popular herb used for smudging is White Sage and is very powerful for cleansing negative energies, objects and space.

Adding Mugwort to a blend of white sage for smudging is called Black Sage, but it is not a sage. It helps bring clarity and deepen intuitive abilities.

As well as White Sage, there is also Desert Sage which has the same cleansing properties as White Sage, and is great for burning without needing to be relit.  It is also flavoured for its scent and for warding off bad feelings and influences.

If you feel like getting creative or invoking more intention into your ceremony, then it can be great to mix other herbs with your sage.

Here are but a few of the many herbs that bring benefit to smudging.

Lemongrass – Energising and refreshing scent, which encourages clarity and focus.

Dragon’s Blood – Burned for love, strength, and courage and can be used to add potency to any spellwork.

Pine Needles – Prosperity, persistence, moderation, self confidence, and for blessing a new home

Lavender – Great to add to the sage

Catnip – Burned for love, beauty and happiness within the home and sacred space.

Clove – Drive away hostile, negative forces, and is said to be a psychic enhancement and increase spiritual vibrations.

Sweetgrass (Hierochloe odorata) is also widely used and revered for sacred smoke ceremonies and is often used in addition to White Sage to call in good spirits.  Sweetgrass has an amazing scent, hence its name, so it is used on the hot rocks of sweat lodges to induce a deeper experience.  It is popular amongst Native American tribes, as well as being known as the Holy Herb amongst European churches.

Tobacco smoking dates back as early as 5000-3000 BC and was used amongst many ancient civilisations. It was believed that tobacco was a gift from the creator and that the exhaled tobacco smoke was capable of carrying thoughts and prayers to heaven.  It was even used to induce trances to aid contact with the spiritual world.

The burning of wood is not just used in sacred fires, it can also be used like a smudge stick or in other rituals.

Palo Santo is highly revered as a smudge and often preferred over White Sage for its ability to cleanse the space and aura deeply.  It’s citrus like scent carries the essence of wisdom and can invoke a deeply intuitive feel.   The name Palo Santo translates to “Holy wood,” best when used for deep healing and clearing energy. On a physical level it can benefit the symptoms of headaches, inflammation, emotional trauma, stress, colds and much more.

Sandalwood has been used for thousands of years in a ritual context. It appears in Buddhist and Muslim rituals, and was one of several fragrant plants used by the Egyptians in embalming rituals. It is also used for keeping connected and grounded, and can be useful when meditating as it harness the wandering mind.

Pagan traditions and witchcraft use 9 sacred woods for burning magical fire for rituals. They are usually burned on the 4 solar sabbats, Samhain, Imbolc, Beltane and Lughnasadh.  When burned on these occasions, the fire represents bringing in new light, knowledge and awareness.  There are different opinions, assuming from different traditions, of which woods are the sacred 9.  Here are more than 9 listed with their Individual uses.

Hawthorn – Purifies and cleanses the heart of negativity

Resins are the lifeblood of the tree, repairing, protecting and healing as it needs.  When burned, these precious resins emit a holy smoke and mystical fragrance, that is known to clear negative energies and connect us with a higher consciousness and the spiritual realms. They are also used to heal, balance and protect the physical and energetic bodies.

Frankincense is one of the oldest documented resins, and has been traded for nearly five thousand years, and is believed to be an aroma that will help your soul reach spiritual heights.  It has a history of reverence during biblical and ancient times, and the Ancient Greeks also used this precious resin as an oblation to the ancient Egyptians.

The mystical qualities of frankincense can lure you into an increased state of spiritual awareness and induce a sense of calm.  It opens the user to deeper observations and insights, and is known to be good for the soul and provide protection and purification.

On a physical level, the aroma when burned activates the protein TRPV3, which is found in all mammal brains. This protein plays a role in our perception of warmth and has an antidepressant and anxiolytic effect, which can lead to feelings of openness and bliss.  Biologists are now also learning that burning frankincense activates ion channels in the brain to alleviate anxiety and depression.

Other sacred resins include Copal, Myrrh, Pinion Pine, Benzion, Amber, and Dragons Blood.  Each of these resins have their own unique qualities and place in spiritual healing.

Agnihotri is an ancient fire ritual from India that was revived and introduced to the western world in the 70’s.  It is a fire ceremony done every day at sunrise and sunset using a small copper pyramid and dried cow dung strips, fueled by ghee with an offering of rice and a special mantra.  It is said to purify the atmosphere to a long distance, and protects the environment and the people within it.  When the practice is done twice daily, it will bring you closer to the rhythms of the sun, and with that, clarity, focus, strength, and inner sanctum.

Moxibustion is a Chinese medicine technique, that involves burning mugwort over certain acupressure points.  Whilst it is considered a physical practice to restore weakened yang energy, the energy of the smoke is said to open up a vortex so that transformation and healing can take place.