A highly medicinal herb, good for soothing pain and enhancing dream vividness/recall, as well as being a great liver tonic and aid for menstrual problems.
Learn More   |   Shop our Mugwort range
<   All Herbs

Mugwort was considered the ‘universal herb for protection and prophecy’ throughout the ancient world. Dedicated to Artemis and Diana, Mugwort was used for pain and healing, psychic powers and lucid dreaming. In ancient China and Japan, Mugwort was hung in open doorways to exorcise the spirits of disease. The ancient Europeans did the same to ward off evil spirits. These two separated cultures also believed that the supernatural powers of Mugwort were revealed by mermaids who came from the sea to present the herb for the good of humankind.

Also known as the ‘traveller’s herb for protection’, Roman soldiers placed Mugwort inside their sandals for endurance on long marches. One Roman general recorded that his men marched 10 miles further, as well as faster, when on Mugwort.

Mugwort was once the staple ingredient in beer before Hops was introduced. It was also known as Sailor’s Tobacco, as it was used as an alternative when sailors ran out of tobacco at sea.

Mugwort tea was usually drunk before divination rituals and also burnt as a ‘transporting’ incense. Also known as the visionary herb, Mugwort is still used today for increasing psychic powers. Native Americans also burned Mugwort as a ‘smudge’ to purify the spiritual and physical environment. The herbal tea was and is still used by women for late periods (and, as it relaxes the uterus, also for natural terminations).

In modern herbalism, Mugwort is used to stimulate and ease menstruation, assist digestion and liver function, expel parasites and relax the nervous system.

The leaves may be smoked for a dreamy, relaxed effect. Mugwort may be smoked or drunk as a tea at night to induce colourful and lucid dreaming. Also placed under pillow slips for astral traveling and fanciful dreams.

Preparations:  1-2 tsp/cup. Steep covered 10 minutes. Once known as ‘sailor’s tobacco’, it may also be smoked as a tobacco or cannabis alternative.

Reference: This is a modified excerpt from Ray Thorpe’s book: Happy High Herbs 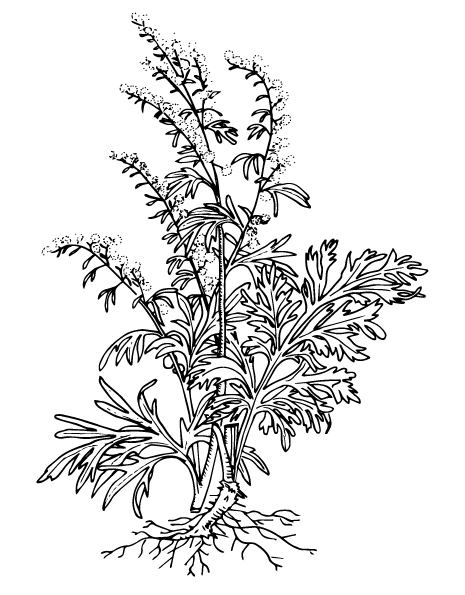 As mugwort relaxes the uterus it should never be drunk, smoked or even touched by expectant mothers… DO NOT USE IN PREGNANCY. Mugwort is potentially allergenic to people sensitive to plants in the Asteraceae (daisy) family.